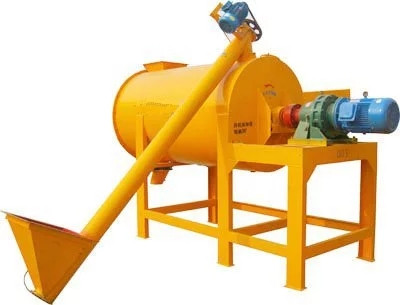 , simple structure and low failure rate. Domestic dry powder mortar is widely used in engineering in recent years. Although there are many manufacturers producing single-axis horizontal mixing equipment, most of them are chemical enterprises.

The mixing equipment is modified from chemical mixing equipment and is mostly used for mixing light powder. Compared with foreign products, the adaptability to mortar mixing is quite different. In June 2007, the Ministry of Commerce, Ministry of Construction and other four departments and bureaus issued the following documents " Notice on Prohibiting Mortar Mixing Microwave sterilization machinery and equipmenton Site in Some Cities within a Time Limit". The notice requires all localities to take effective measures to support the development of ready-mixed mortar production enterprises according to the timetable and local actual conditions. With the country's vigorous development of dry powder mortar industry, China's dry powder mortar production line will also develop towards large-scale and high productivity. Shandong Construction Machinery Company has designed and developed GSJD 4500 horizontal single shaft dry powder mixer to meet the market demand. GSJD 4500 Dry Mortar Mixer consists of transmission system, mixing tank, mixing device, discharging system, auxiliary mixing device, sampling device and gas sealing system, as shown in Figure 1. This machine is driven by a motor, and can choose a variable frequency motor, speed regulation by using a frequency converter, and realize on-load starting and energy saving. In order to improve the homogeneity of dry powder mortar, the mixer adopts a pear blade mixing device and consists of a mixing shaft, a mixing plow blade, a side scraping arm and a shaft end sealing device.

The unique structure of the plow blade group ensures that the mixed materials move axially in the mixing cylinder, and the distance between the plow blades can ensure the strong turbulence of the mixed materials. When stirring, the mixed material is thrown along the normal direction of the two sides of the plow blade, and when the material containing various fibers flows through the fly knife group, it is quickly interrupted and dispersed by the fly knife rotating at high speed. The material is quickly mixed under the double action of the stirrer plow blade set and the high-speed fly knife, and the mixing precision is very high. 6.5 Double layer and block design of shield structure

6.7 shield docking Shield butt joint selected the surrounding rock to be relatively stable and in good geological condition In the section of the project, one will stop the machine to reinforce and the other will continue to drive, thus making the two shield cutters contact each other in a bold and innovative way, saving time and effort. The laser guidance system used by shield machine is advanced in equipment and accurate in guidance, and the deviation of the left line butt joint is within 30 mm, making the butt joint tend to be perfect.