Fried food is popular among consumers because of its good flavor characteristics.

The flavor of fried food is the result of complex physicochemical reaction of raw materials in oil. In this paper, the relationship between frying process and flavor was briefly described, and the research progress of aroma, texture and color of fried food was introduced.

The aroma of fried food is mainly composed of two kinds of special aroma in a certain proportion, one is oil aroma composed of low-grade unsaturated alcohols and aldehydes, the other is caramel and baking aroma composed of pyrazine, pyridine, furanone and other heterocyclic compounds containing oxygen and nitrogen; it is mainly affected by the flavor components of oil itself, fatty acid composition in fried oil, frying methods and frying technology.

The influence of parameters and other factors. The texture characteristics of fried food are mainly the formation of a hard outer shell and micro-holes in the inner part, which are mainly affected by the technological parameters of frying, the variety of frying oil and the way of frying.

The characteristic color of fried food is mainly red and yellow. It is mainly produced by caramel reaction, Maillard reaction and other reactions. It is mainly affected by the nature of raw materials, the substances produced in frying, the frying process parameters and the processing methods. The golden color is the first impression that fried food is introduced into people's senses.

The color of fried food is mainly produced in the second and third stages of Maillard reaction. In the first stage of Maillard reaction, the product was 1,2-enolated by fructosylamine, and hydroxymethyl furfural could be used as a marker of food browning. In the third stage, melanoid was mainly produced, which made the color of fried food darker and darker [34].

At the same time, carbohydrates that do not coexist with amines in the frying process also undergo thermal degradation, which mainly produces some volatile substances and eventually polymerizes to produce caramel with burnt paste odor, namely caramelization reaction. The color of caramel reaction varies with the reaction process, and the color deepens gradually, eventually forming a brown caramel color. 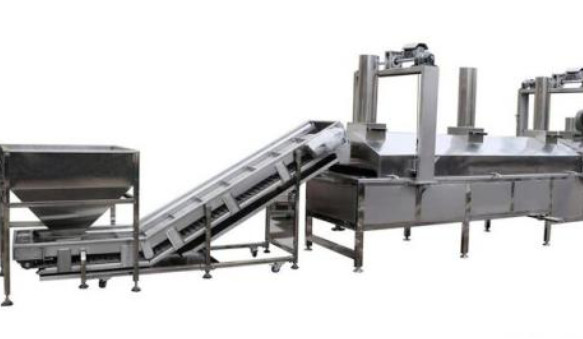 Previous page:  Study on the Quality Change of Cocoa Bean Processing Based on Sensory and Principal Component Analysis
Next page:  Controlled Crushing and Sterilization of Extruded Food
All Products Contact Now