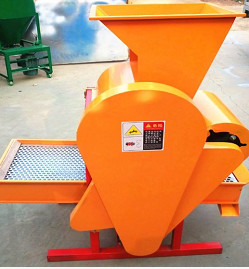 Peanut is not only an important cash crop, but also a protein plant with high nutritional value. A large number of peanut shellers are used in food processing and foreign trade export in China. Therefore, it is particularly important to develop peanut pod shelling mechanization.

Understanding the application status and development trends of microwave drying machinery and equipment in China will help peanut shelling in China. The development of shell mechanization plays an important role.

Peanut sheller is a field operation machine that removes the shell from peanut pod and gets peanut kernel. Because of the physiological characteristics of peanut itself, peanut shelling can not be combined with peanut harvest in the field, but can only be carried out after the moisture content of peanut pods has dropped to a certain extent.

With the continuous development of planting peanuts, peanut shelling by hand have been unable to meet the requirements of efficient production, the implementation of shelling mechanization imminent.

It has the characteristics of compact structure, flexible and convenient operation, high removal rate and low power consumption. 6BK-22 peanut sheller is a kind of machine that can complete peanut shelling work by feeding at one time. The peanut kernels can be directly packed and stored in bags after primary selection of wind power, fan vibration, stratified separation, re-cleaning and classification. The 6BH -1800 peanut shelling machinery adopts three roll mix